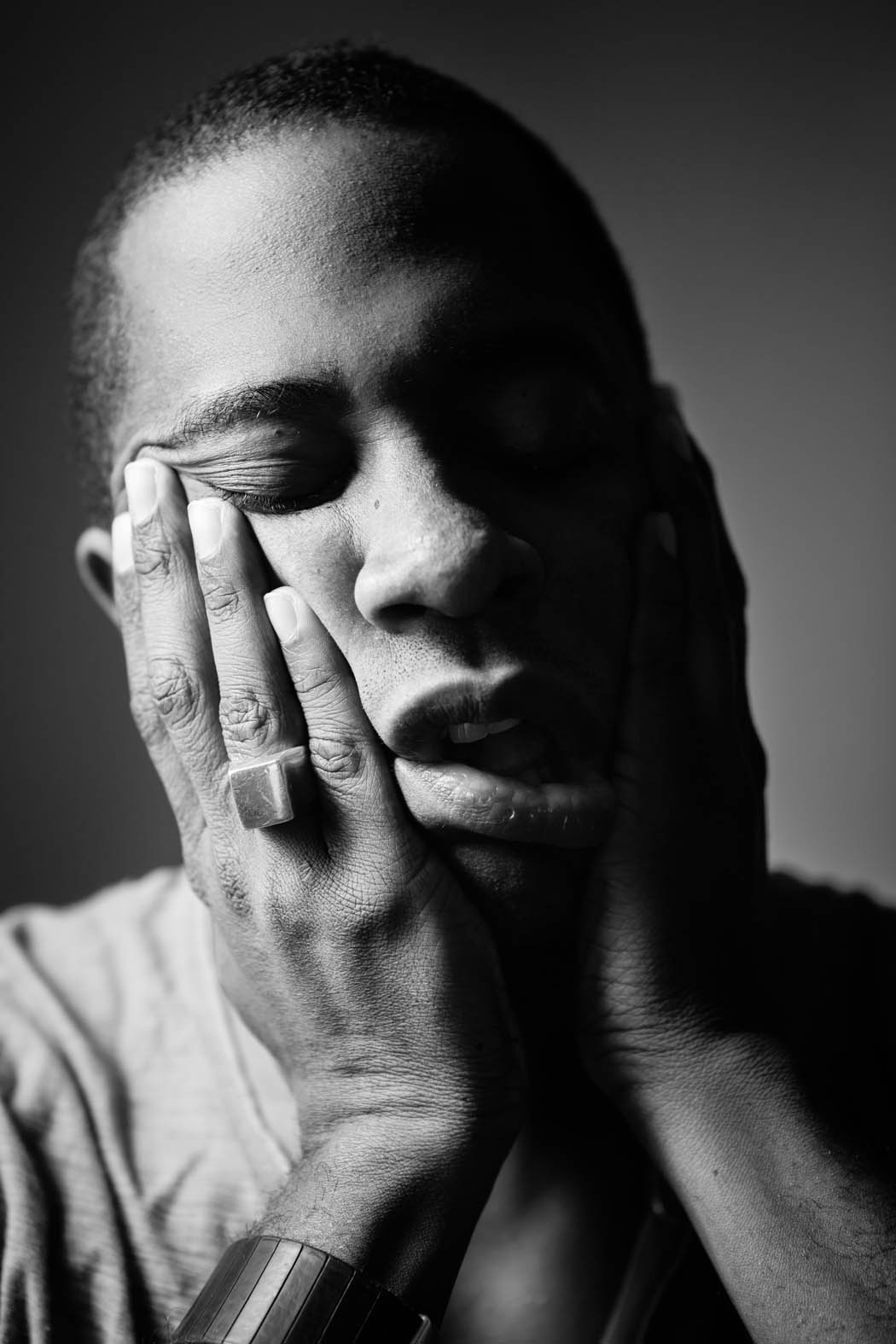 Sanford Biggers doesn’t shy away from the big issues – race, religion, American history, art history and politics, to name a few. Having lived all over the world, Sanford is somewhat of a nomad – a characteristic that has helped hone his views on cultural syncretism, a reoccurring theme that appears throughout most of his work. Through the expression of diverse cultures, he creates a unique perspective on traditional societal paradigms.

Having played the piano for most of his life, music is often the predominate element in his work. By combining multivalent media such as music, installation, sculpture, painting and performance, Biggers invites the viewer to be an active and engaged element in his work.

The varying institutions at which Biggers has exhibited evidence his versatility and relevance as a contemporary artist. In 2012 he had solo exhibitions at the Brooklyn Museum, MASS MoCA, and the SculptureCenter. His work has appeared at the Tate Britain and Tate Modern in London, the Whitney Museum in NY, the Studio Museum in Harlem, and many other international institutions. Biggers was recently awarded the American Academy’s Berlin Prize and has received the Greenfield Prize, The Creative Time Travel Grant, and the William H. Johnson Prize, to name a few. And, in case you’re thinking Biggers is a bit of a slacker, he is also an Assistant Professor at Columbia University’s Visual Arts Program.

Fresh off his trip to Art Basel Miami, Sanford sat down with Gravure to chat about his recent travels, musical inspirations, and repurposing antique American quilts…
Gravure: Having worked in film/video, installation, performance, sculpture and music, is there any one medium to which you feel a particular affiliation?

Sanford Biggers: In my practice, I consider each discipline to have its own language, and these languages are in turn used to translate ideas into form. In some cases, music can say things installation can’t and vice versa. What is most intriguing for me is finding ways to have these languages all speak in chorus with one another.

Gravure: It’s clear that you’re inspired by somewhat of a cultural melting pot – everything from hip-hop to Buddhism, African American ethnography to Afrofuturism. Can you tell us a little about how these themes play out in your work? Are they predominantly introspective, or merely a commentary on society?

Sanford Biggers: I would also add American history, Art history, ritual, Surrealism, Dada and Metamodernism to that list. While my work is referential in some aspects and is embedded with a great deal of content, it also proposes new interpretations and understandings of those referents and content, prompting the viewer to ponder and engage with the work through the lens of their own subjective experiences.

In terms of introspection, I feel the physical creative process is deeply introspective for me; however, the finished work itself is more a product of this complicated global society that we are all products of.

Gravure: Your work generally seems to carry some sort of social message. Are you purposely being politically probative?

Sanford Biggers: That is an interesting question. I think I operate through a few different personae – the satirist, the spiritualist, the revisionist historian, and the formalist. More than one of these personae may be present in any particular piece, but I find once I am implied as the author, all neutrality is lost and the work takes on a more politicized meaning. In other words, some of my works certainly do have a socially informative agenda behind them, and others are exercises in formalism. I’ve recently been more interested in blurring the lines between content and form. This allows for far more freedom.

Gravure: How do you think your work’s relevance differs in New York than it does in, say, Japan?

Sanford Biggers: Having worked site-specifically for a large part of my career, I would often spend extended amounts of time in different locales, anywhere between a few months to a few years. Those works were produced through considerable research and interaction in each country, but the common denominator, of course, was how I processed the experience and combined it with my own set of interests.  Working and living in so many different contexts has made my work multivalent to the point where, optimally, viewers in Japan and NYC each have multiple points of entry while simultaneously being confused and curious.

Gravure: What has been your most transformative travel experience?

Sanford Biggers: The most transformative I would have to say was my three years living in Nagoya, Japan. I was there long enough to learn Japanese but, more importantly, to pick up on the subtleties of non-verbal communication, ritual and wabi-sabi. I was also turned on to Buddhism while there, and was fortunate enough to study zazen with a Soto Zen monk for some time.
The second most transformative was my stay in Salvador da Bahia where I shot my last video piece. While there scouting locations for a month, I spent 24 hours in a terreiro candomblé, a house of Candomblé worship, performing ritual and studying with the Mae de Santos or “Mother of Spirits.”

Traveling is all about inner and outer expansion but, for me, experiencing the more esoteric nuances of a culture give one a deeper insight into the psychology of that culture. Ironically, I find more syncretism than difference between cultures through this approach.

Gravure: Having played the piano for most of your life, how does music influence your work and your performances?

Sanford Biggers: Music is perhaps my biggest influence. To return to the language metaphor for a moment, music travels through the world much more efficiently and democratically than visual art. It has less cultural, historical and class baggage. But beyond how it is consumed, on a formal level, I take cues from pattern, polyrhythms, pitch, percussion, tonal movements and improvisation. Though a fan of all four, I’ve learned as much, if not more, from Monk and Miles than Mondrian and Matisse. Being a musician, I am quite comfortable collaborating and have made several pieces with other artists including David Ellis (aka “Skwerm”), Jennifer Zackin and, most recently, Hank Willis Thomas. I’ve also incorporated original music and sound into my videos and installations as well as touring with my concept group Moon Medicine, which features rotating musicians and performers like Imani Uzuri, Martin Luther, DJ Jahi Sundance, Swiss Chris and my VJ, Mark Hines.

Gravure: What has been your favorite performance piece (that you’ve created) to date, and why?

Sanford Biggers: My favorite performance was “The Somethin’ Suite,” which was a commissioned piece for the performance art biennial, Performa, performed in NYC at The Box in 2007. The environment was vaudevillian burlesque and the theme was a satirical, political revisionist minstrel show or, what I like to call, a Post-Minstrel Cycle. For the hour-long performance I directed, composed music and performed with an ensemble cast comprised of singers, poets and performers, such as Saul Williams, CX KiDTRONiK, Esthero, Martin Luther, Imani Uzuri, Shae Fiol, and Jahi Sundance. Using the format of a traditional minstrel showcase, minus blackface, we covered issues ranging from lynching, reality TV, hip-hop, George W. Bush, cosmic shamanism, the Jena 6 incident, Burt Williams, Yukio Mishima’s Confessions of a Mask, prison chain gangs and lap dancing. You can see an excerpt at my website.

Gravure: What are you working on now, and what’s up next?

Sanford Biggers: I’m presently working on a series of mixed media paintings and drawings on repurposed antique American quilts. This series is a return to two-dimensional work and a more traditional studio practice, which is a nice change of pace from the last few years of large-scale institutional projects. This spring I will open a solo show in Milan with Massimo Di Carlo, install an outdoor sound piece in Verbier, Switzerland in early summer, and shoot the final episode in the Odyssean video trilogy Shuffle, Shake, Shatter (the Carnival Within), that I’ve been working on for the last five years. The first two episodes, Shuffle and Shake were shot in Stuttgart, Germany and Salvador da Bahia, Brasil, respectively, and Shatter will be shot on Goree Island and Dakar, Senegal and Lalibela, Ethiopia in the summer. All three will be screened as a major installation at Arthouse in Austin, Texas in early 2014.