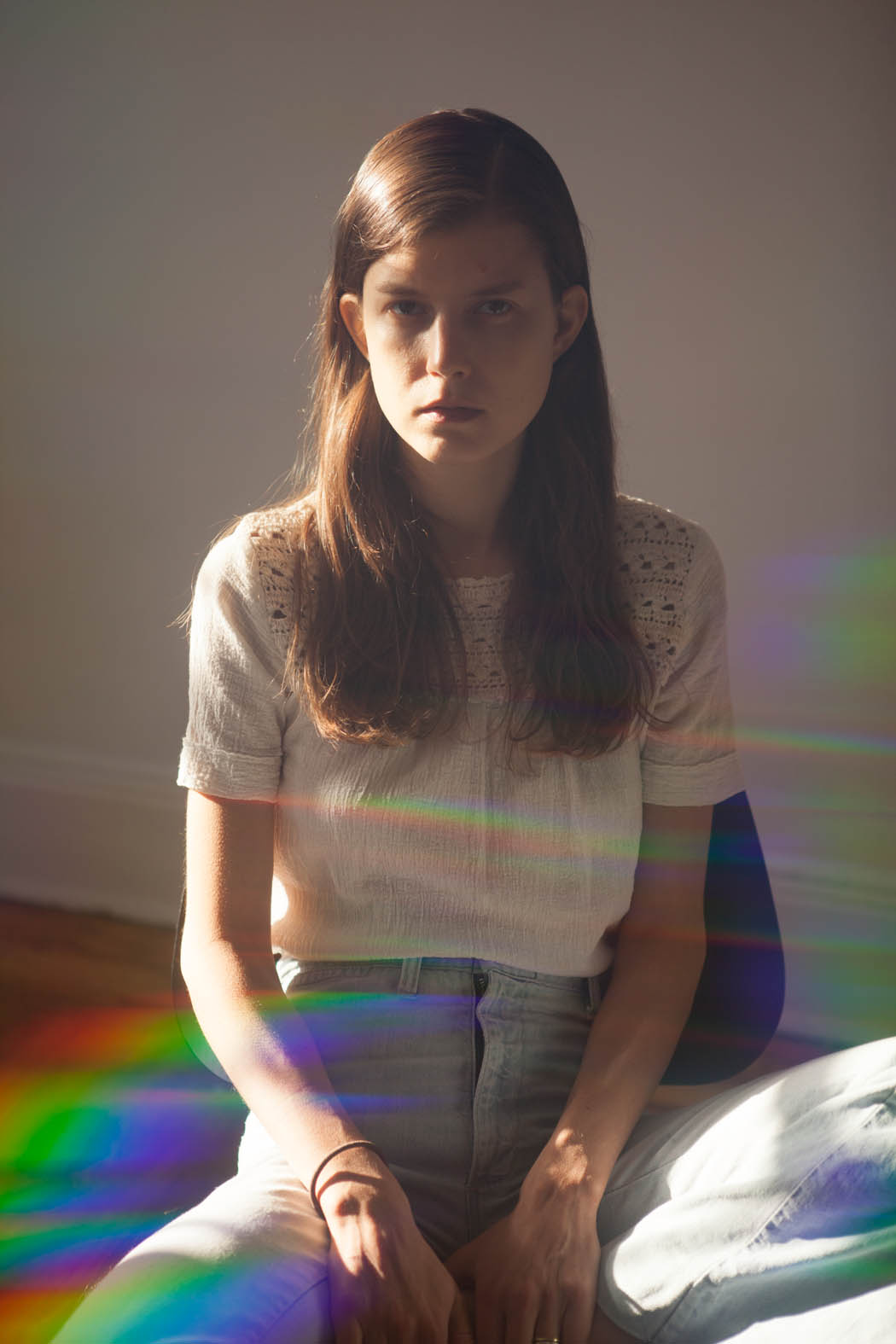 Martynka Wawrzyniak, a New York-based mixed media and performance artist, is mightier than meets the eye. A former model (cue the yawn), Wawrzyniak’s delicate features and slender frame belie her intense and often unsettling work as an artist – previous projects include her being assaulted by ketchup and drowning in chocolate. With a smattering of group and solo shows including The Journal Gallery, New York; Spencer Brownstone, New York; and Garage Center for Contemporary Culture (at the 54th Venice Biennale, Italy), Martynka seems to have successfully matriculated from model to artistic maven.

In her most recent endeavor, Polish-born Wawrzyniak spent a year capturing her “biological essence” in a project where she served as both subject and investigator. The installation of her “olfactory self-portrait” was exhibited at Envoy Enterprises in New York late last year, and is slated for international showings throughout 2013.

Gravure: What compelled you to capture your own scent?

Martynka: My work had become progressively more of a visceral experience for me. I had this idea to produce a work created by pure primal sensation – something that was more of a gut reaction, than a visual spectacle. Smell became the perfect medium to experience something viscerally because there is nothing else but feeling. You’re literally just inhaling through your nose, and it’s going directly to your brain and creating feelings and memories – it’s purely primal.

I’d been driven by my nose ever since I was a small child, having always been obsessed with my sense of smell. I’m like a dog in the way that I relate to people and my environment. I’m extremely sensitive to the sense of smell. I wanted to do a show devoid of visuals, something that could be experienced by the nose and not the eyes.

This project represents the most pure portrait of a woman: you’re not influenced by what she looks like and there’s no prejudice with regards to her physical appearance. It was almost a spiritual portrait – in a way, the olfactory aura can be likened to your spirit or your soul. It’s the pure essence of a person without the prejudice of their appearance. I could be a 400 pound Asian woman and you would never know.

Gravure: Tell me a little about the creative process for this project.

Martynka: I did some research on Google and the Internet and concluded that I needed to work with a chemistry team – I couldn’t do it all at home. So I called up Hunter College, thinking maybe they could put a note up on their board to a professor, in order to help me find a chemistry student as an assistant. I got put through to this amazing woman, Professor Donna McGregor, who suggested that I enroll as a chemistry student for the summer semester so I could have access to the lab. It was an actual class, and I actually got a research credit, which is pretty funny, since I definitely failed high school science, but now I’m a scientist.

Professor McGregor assigned a team of three research students (Charles Paszkowski, Paul Tewfik and Paul Kozlowski) to my project. I was basically a living, walking extraction sample for the whole summer. We worked as a team to find out how we could extract the smell from my body. We actually got a lot of information from crazy websites like the CIA’s online portal.

In order to extract my sweat, I had to sleep in the same T-shirt for five nights, or go to bikram yoga class in it and then put it in a sterile mason jar. Then I would go straight to the lab and wash it in ethanol to get all the sweat out, evaporate all the water and ethanol, and be left with the essential oil of my sweat. It was pretty cool.

I would also collect my hair and cry into vials. I still have jars full of my hair in my room because I don’t want to stop collecting it. The tears were the hardest. I would have to cry directly into vials. To elicit the tears, I created a playlist of childhood songs and cartoons that made me nostalgic. Whenever I see these cartoons it reminds me of being a little girl in communist Poland, and it makes me really emotional. I would schedule official crying dates with myself, which had to be in the morning, because I needed to take the tears straight to the lab. Kind of crazy, really.

Gravure: You had to create a synthetic version of your scent. How and why did you do this?

Martynka: I wanted the viewers to have an interactive experience, but I couldn’t squeeze out enough of my sweat to run the show for 30 days, so I had to create my scent synthetically. I was fortunate enough to get connected with one of the top perfumers in the business, Yann Vasnier, who works for a company called Givaudan.

He actually really enjoyed working with ingredients that normally aren’t used within the industry. For my project, he was tasked with creating the smell of a human – the opposite of what he normally does, which is creating a scent that masks our natural smell.

Vasnier collaborated with a scent director (referred to as a “nose” in the industry), Dawn Goldworm, who figured out the scientific formulas for the “perfume.” She’s also very famous in the industry, most recently for creating Lady Gaga’s perfume.

Dawn spent a lot of time smelling me, and trying to match my smells with natural and synthetic ingredients. We had different smelling sessions (my hair took the longest), and then we refined it even further. Basically, all natural smells change over time because all the light, green notes evaporate off; so Dawn would smell my armpit and hair to try and put back some of what was lost so that it could be even more authentic. I would say that the synthetic recreation is closer to what I smell like than what’s in the vials now, because they’re already a year old.

Gravure: And is it true you turned your sweat into wax candles?

Martynka: Yes! Enfleurage is the most ancient method of scent extraction, where they put flowers in animal fat. I attempted “human enfleurage,” where I put Crisco all over my body, wrapped myself in bandages, and marinated myself in the heat for three hours. It proved impossible to extract my smell from the smell of Crisco, which also has its own unique scent – actually it’s quite disgusting – kind of like soybean oil. The method that ended up working was to cover myself in odorless paraffin wax. I repeated the same procedure, this time adding a little extra sweat essence. I turned some of the scents into wax candles, but I wouldn’t advise lighting them. When you heat a human scent, it smells like cooking meat and onions – kind of like burning flesh. Not really advisable.

Gravure: What do you think about how intimacy and smell are connected?

Martynka: Your smell is like your last layer of invisible clothing. Even when you’re naked, people are wearing deodorant or perfume and masking their true self. Sharing the smell of your own body with the public is like the ultimate nude self-portrait taken to the next level of intimacy.

Gravure: How do you smell?

Martynka: In general, I smell very green. I’m a vegan, so I smell literally like the pulp out of a juicer mixed with sweet, lactonic, peachy notes – coconut with greens. I didn’t modify my diet at all, but I did avoid onions and garlic throughout the year. Sweat from my nightshirt was actually a lot sweeter than fresh sweat – like honey, coconut and chocolate. Interestingly, women smell the best when we ovulate, so I chose the samples that were collected between day 14 and day 21.

Gravure: What aspects of your life and environment inspire your creative process and ideas?

Martynka: I spend a lot of time observing human behavior and being hyper aware of my own primal senses. Ideas often become clear to me while I am cooking, walking or practicing Bikram Yoga.

Gravure: How did you first get interested in contemporary art?

Martynka: I have to credit my charismatic high school art history teacher, Robert McCloud, for enlightening me about avant-garde visionaries such as Duchamp and Vito Acconci. A fire went off inside me and I decided that I had to move to New York!

Gravure: What did Santa bring you this year?

Martynka: I was very spoiled this year and got a much needed new computer!

Gravure: What show are you looking forward to seeing this month?

Gravure: Which artist’s quote or words do you live by?

Martynka: “Art is not meant to give pleasure but to ask questions and make people think” – Christian Boltanski. I cut this out of a New York Times article in 2010 and have had it taped to the wall since.

Martynka: You will have to wait and see!! I am working on a new project, but I’m not ready to talk about it just yet!