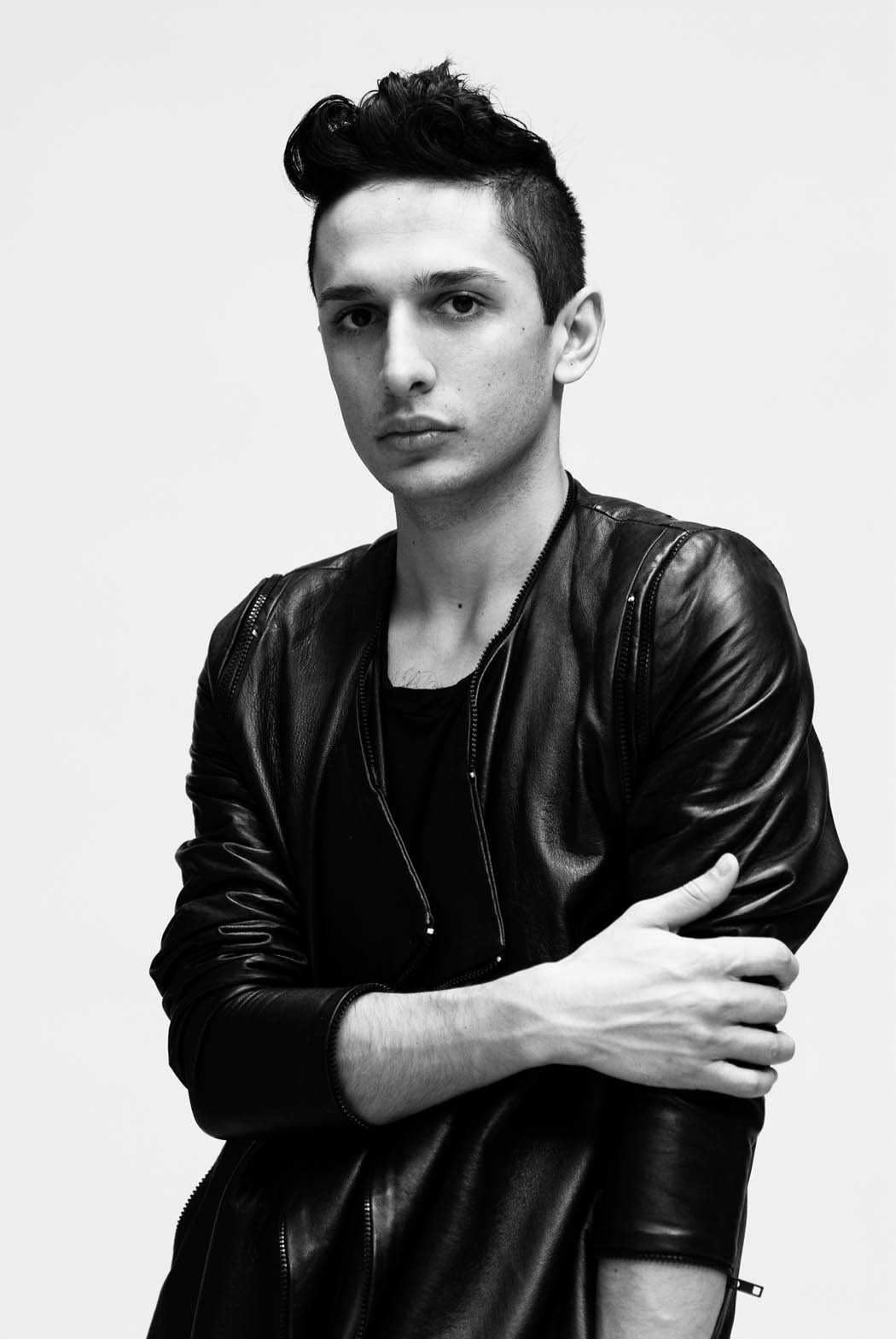 Gravure: Tell me about your “no-background background,” as you’ve described it. How does that philosophy shape your sense of innovation—of what is and what isn’t possible?

Rad Hourani: I didn’t study fashion. I didn’t study how to make clothing. After I moved to Paris in 2005, to do styling, I erased all of the past in my head, and all of the ways I had been conditioned as a human—how I understood men’s dressing codes, women’s dressing codes, religion, whatever. I started my own way of thinking, by observing what was going on around me, from traveling, from meeting people, from experience. That’s what I mean as “no background.” It’s a background of erasing the past and starting again with my own observations.

G: I don’t know if I’d call it “rebelling,” but would you say you were “reacting” against something?

RH: Maybe “doubting.” I think it’s very important to doubt everything you believe in. You can believe in something, and see a beauty in something, and someone else will never see that beauty. What’s important is to doubt everything, and question everything. Not in a destructive way—it’s not a negative thing, but a positive thing. It’s related to this unisex thing that I started—many people are not used to unisex clothing; they don’t understand it when they see it. But I’ve been lucky because [other] people have been reacting in a really good way—people who react to it using their minds, who are not necessarily trying to be intellectual, but who understand that what I’m doing is erasing the codes of men’s and women’s dressing. 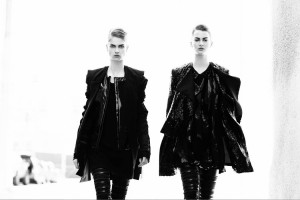 G: Is there a particular piece in your collection that exemplifies this sense of starting anew?

RH: When I began using zippers to create transformable pieces—pieces you can transform into many different styles, masculine, feminine, aggressive, sensual. It shows individualism. It takes someone who understands it—who doesn’t necessarily follow trends, but someone who enjoys a beautiful piece of clothing that can be worn in many different ways.

G: Was there a moment for you when you said to yourself, “This is what I am going to do,” a finished piece, a sketch?

RH: Since I was a kid, I was always attracted to fabric. I never wanted to wear what other kids were wearing—every time my mom brought something home for me, I wouldn’t want to wear it.

G: What did you end up wearing?

RH: I remember wanting to wear these high boots, a kind of black cowboy boots with a high heel—not necessarily a feminine high heel, just a high, unisex heel. I always wanted to wear them with these very long, slim jeans. I took all of my pants to be tailored, to have them made very slim, and [the tailor] was, like, “Are you sure you’re going to be comfortable?” And I was, like, “Yeah, of course.” I was very sensitive, but also very tough, in a way—even if someone said, “It’s too weird, it’s too this, it’s too that,” I was very tough about it, and I’d wear it with comfort. 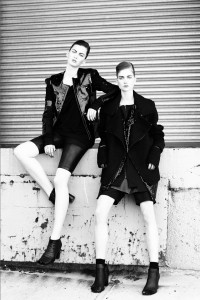 G: And at some point, that preoccupation with what you wore became an interest in making clothes.

RH: When I was 20—I’ve never said this in an interview before—I started to sketch these dresses. What I sketched had nothing to do with what I’m doing today—except that it was black.
G: Dresses! That’s hard to believe, coming from you.

RH: I didn’t know myself very well then. What I do today is a reflection of the way I see myself and the world. I was in Paris, shopping all the time, looking for the clothes—but what I found was always too rough, too punk, too vintage, too feminine, too masculine. In the men’s collections, I’d find beautiful shapes, but not good fabric, or I’d find good fabric in the women’s section, but [the pieces] had these curvy lines. I never found exactly what I wanted. That’s why I started my line.

G: At that point you understood yourself better.

G: Your father is Jordanian, and your mother Syrian, and you’ve lived and worked in Jordan, Montreal and Paris. Do you see any value in describing yourself as a Canadian, French, or Jordanian designer?

RH: I’m anti-nationalism. I think it’s very limited to see the world by different countries, or names of cities and countries and boundaries. We exist in a universe, where there is no country called “U.S.A.” or “Canada” or “Jordan.” That’s what creates war between people and all of these social troubles that exist in the world. I’m not interested in doing something where you can say, “It’s so American” or “It’s so Middle Eastern”—or even, “I see the ‘60s” or “I see the ’70s.” I’m not interested in any nationalism or culturalism—it comes, again, from the no-background background. What I’m interested in is a new world of today and tomorrow. It has no nationality. It has one world and one vision—no gender, no seasons, no trends. I’m not interested in one language or one culture. Someone said to me, “Your clothes are made for a niche of people, a certain kind of people.” But I think we’re all the same. My clothes are made for anyone who understands that. 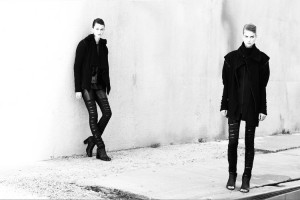 G: I understand that. But I feel like it’s possible that cities—Paris, where you live, or New York, where you show—feed your work in a way that the idea of nationality does not.

RH: Absolutely. It’s not necessary to separate the world by country or nationality or skin or gender or season—but if you talk about different cities, every one has its own charms. What I love about New York is the way people there always move forward—New Yorkers have that mentality of taking something forward and making it big, making it really powerful. That’s what I love about New York—how people will always come together and be excited about new things, and always want to build and move forward. And that’s why every time I leave, I’m exhausted. You really empty everything into it.

RH: It’s a different way of doing things. People like to take their time. Paris is much older than New York, and there is so much more—I wouldn’t say culture, but history. People like to make things, but they like to take their time, for a long time. I can’t live without the way New York does things; I can’t live without the way Paris does things. So creating here and exhibiting there makes sense to me.

G: One of the words I’ve seen used most often in describing your work is “goth.” What do you make of that?

RH: For me, it’s a bit a miss. It’s almost like when people see a black garment with leather straps, they’ll automatically say it’s gothic. It’s not gothic at all. I see everything in one garment—I see everything that I lived in the past, and today and tomorrow. You can see architecture and modernity, sleekness, futurism. My clothes are really a mix of everything that I am and everything in my past. I think my clothes are not necessarily gothic at all. I’m a very happy person — I’m not gothic. I’m not dark at all. It’s not that it’s black so it’s dark—it’s just a graphic, modern shape that makes sense to me.

G: Do you have an ideal client, whether it’s Rihanna or the coolest guy on the street?

RH: It’s a great compliment when you see someone wearing your clothes—it’s very touching. What I’m interested in is that I make clothes that can be adopted to any style of people. Someone said, “You make clothes for skinny people.” But they’re not made for one sort of people. I have a client who is 65 years old—I’m not into age; this client is ageless, and she wears the clothes extremely well. She says, “I feel new, and I feel modern, and I feel so good when I wear your clothes.” Whether it’s the cool girl on the street, or a gentleman, or a cool kid, or a fashion student—or a singer or an actress—what’s very important is to see different kind of people wearing my clothes. They’re made for anyone, anywhere, any time. 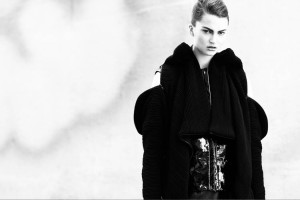 G: There’s a lovely sense of otherworldliness to your clothes, and also to the philosophy behind them. But they do reference a world quite different from the one we live in, and a world I would say is often at odds with your vision.

RH: This really is the world I live in, every day. It doesn’t make sense to me that a women can wear a dress, but not a man—or a man can wear a tie, but not a woman. This is exactly the way I see the world. I don’t need to follow what others tell me, but I can adopt what makes sense to me, in my life. You don’t need to follow what I do, but take what makes sense to you and adopt it to yours. It takes people like you and me and more to build this world together. It sounds like John Lennon — but I do believe we can build another world.